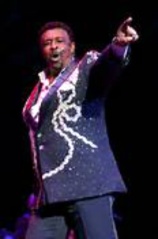 On this day, I have decided to dedicate and pay homage to one of the voices of my favorite group of all-time – The Temptations. Come along as I stroll down memory lane remembering the sweetness of harmony that is realized when we think of the Temptations. We know the classic lineup change often, but the music remained true to the “Temps” style.

Those who know the group, know that the great David Ruffin was only a member for about four years. In that short period of time, he became a legend, and that classic lineup became virtually immortal. After his departure, they needed a replacement, and they turned to the perfect compliment. Dennis Edwards, an ex Contour, is truly underrated for his work taking the group in a different direction and to another level. Imagine, if you can, replacing a living legend. We could say that it was the Dennis Edwards era of greatness.

Dennis Edwards came to Motown in search of a solo career. Motown signed him on a retainer, in order to keep him from signing with another label. He was eventually slotted into the rough and rowdy Contours. Meanwhile, Otis Williams and Eddie Kendricks, having seen him as he dominated a Contours performance, figured he would be a perfect replacement for David Ruffin, whose showboating had gotten on the groups last nerve.

With the addition of Dennis came a whole new sound, thanks to the genius of Norman Whitfield. “Cloud Nine” would give Motown and the Tempts their first Grammy. For the next six years Dennis’ soulful shout would be heard on hit after hit, including “I Can’t Get Next To You”, “Don’t Let The Jonses Get You Down”, “Ball Of Confusion”, and, of course, Grammy winner “Papa Was A Rollin’ Stone”.

By 1975, the group became tired of the social conscious “message” songs and wanted to return to the love songs they so enjoyed. The Tempt’s left Motown for Atlantic and Jeffrey Bowen took over production, and as a result, A Song For You would turn out to be one of the group’s most satisfying albums, as well as proving the versatility of Edwards.

Longevity is something that is rare in the music business. The Detroit-raised Edwards, who moved to St. Louis in the 70s to be close to his mother, remarked in a recent interview “I never imagined I’d be one of the last ones standing, me and Otis… We really got caught up in the times, and how the heck did I make it? … I had a mother who prayed for me, and prayer changes everything.”

Dennis always wanting a solo career, left the group and cut a solo album for Motown. The album never materialized and after a short and humbling stint as a construction worker, Dennis rejoined the group, who had returned to Motown, for the triumphant release of Power, a Berry Gordy produced album.

During all this, Dennis finally did release his first solo album, Don’t Look Any Further, in 1984. It was a great album, the title song with Siedah Garrett being one of the great duets of the decade, but Dennis began having problems with drugs. A second album, Coolin’ Out, was released the next year but proved to be far inferior to the first. The title track was a moving and autobiographical piece on which Dennis sings about trying to put his life back together.

In 1987, Dennis would again return to Motown for the appropriately titled, Together Again. But in 1988, embattled by personal crisis, he left the group for good. In 1989, after talking with friends and former group mates Ruffin and Kendricks at the Temptations R&R Hall of Fame Induction ceremony. He united with the pair and the trio set off on a historic US tour. A couple of years later, the unexpected deaths of his good friends, Ruffin and Kendrick, left Dennis alone.

After those tragic events, he formed several groups attempting to use varying forms of the name “Temptations” that he had to battle in and out of court for use of some form of the name. Now, seventy years old, he continues to perform as Dennis Edwards and the Temptations Review pleasing audiences all over the world. No matter what the result, Dennis Edwards is a true “Soul Survivor”, and one of the most gifted singers of our time. He still has his sensuous and soulful voice, and no one can take that away.

By the merciful grace of God, he is the only one of the classic Temptations lead singers alive to continue the legacy and we are so blessed. And that’s my Thought Provoking Perspective…

Welcome to Thought Provoking Perspectives a blog designed to be a potent source of empowering knowledge to broaden the information base with those who share my passion for the written word and the empowerment of thought. END_OF_DOCUMENT_TOKEN_TO_BE_REPLACED
This entry was posted on Thursday, March 12th, 2015 at 9:00 am and tagged with Aretha Franklin, black history, david ruffin, Dennis Edwards, Detroit, Eddie Kendrick, entertainment, Gospel, Motown Records, music, PBS, rock and roll, soul music, Supremes, Temptations and posted in African American, GOP, history, Music, Obama, Politics, racism, Republican. You can follow any responses to this entry through the RSS 2.0 feed.
« Ferguson Police Chief Resigns Following Scathing DOJ Report
The Mothership Finds A Home »