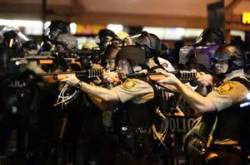 Missouri has a slogan, and they call themselves – “the show me state.” Frankly, I never got it because what have they shown anyone. Except being first in bigotry! I have been to Missouri, and I never want to go back there again, from what I have seen. People talk about Baltimore and Compton as if they are the most dangerous places on the planet. I disagree because St. Louis and E. St. Louis makes either of those place look like a daycare camp! I am not just talking about the current state of affair as it relates to race relations, but historically. Missouri was and probably is second only to Mississippi as far as race relations go.

The state was an ardent states right advocate and slaveholding state. Let me remind you that it is the place where the infamous Dred Scott Case originated. If you don’t know about it, it was a case of a slave fighting for his freedom that was taken all the way to the Supreme Court, which said in its ruling; “there are no rights that a black man has that a white man is bound to respect.” By the way, did you know that Dred Scott is buried about a mile from the spot where Michael was murdered? Let that sink in for a minute.

Fast forward to the current state of racial affairs; the nation and the world witnessed the militarized show of force that occurred in Ferguson after the death of Michael Brown and all the fallout discovered after that happened. That place was so corrupt that nearly half the town leaders were fired, including the police chief and court officials. I would suggest Ferguson is only the tip of the iceberg, news reports have come to light since including from the Justice Department that the way that town operates is business as usual throughout the area, and dare I say the state, which is a reflection of the nation as a whole. Maybe that is what they mean by the slogan – “show me state”!

The reason I wrote this article is because of the latest unrest on the Missouri campus brought on by dissatisfaction with the way the president of the university system handled complaints about racism that has been brewing for months. The President and Chancellor of the school were forced to resign yesterday. This only speaks to the system that is institutional racism deeply embedded!

Ironically, white folk, as they do, thought it was a shame these folk had to lose their jobs, which is the normal reaction. This is as predictable as the sun rising each day. We saw it last week with the cop who threw the little girl around the classroom was fired. They said, it was too extreme not what the cop did to which he was rightfully fired for, which was nothing more than child abuse. Closer to home, we saw how the racist there raised millions for Darren Wilson.

It took only two days after the football team joined the strike and threatened to stay off the field in protest of the young man who went on a hungry until his hunger strike ended. This is an important lesson, although not one that blacks have not known or been taught. There are only two things white folk understand, and that is CASH AND CASH ONLY! The bus boycott in Birmingham lead by Dr. King was the most effective civil rights action in the history in America. In this case, the football players realized by not playing football would cost the school millions! We must understand that racial and economic justice goes hand in hand.

Therefore, Black America must learn to speak the language of the racist. Black people must realize that you can’t stop racism with “love,” they have been doing that for four hundred years, and that has not worked. Black people spend more than a trillion dollar a year, with most given to others, so it is as simple as not spending that money, yes boycott, then change will occur and not until. So I say, let’s cancel Christmas and keep out money!!! And that is my thought provoking perspective…

Welcome to Thought Provoking Perspectives a blog designed to be a potent source of empowering knowledge to broaden the information base with those who share my passion for the written word and the empowerment of thought. END_OF_DOCUMENT_TOKEN_TO_BE_REPLACED
This entry was posted on Tuesday, November 10th, 2015 at 7:47 am and tagged with African American, boycott, current-events, Dred Scott, Ferguson, history, justice, missouri, PBS, racism and posted in African American. You can follow any responses to this entry through the RSS 2.0 feed.
« As Simple As Black And White!
A Simple Truth »