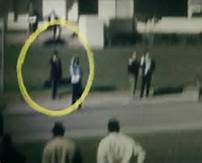 The JFK assassination is full of mysteries, untruths and some say lies. One of the strangest things that happened in Dealey Plaza on November 22nd was a man standing holding an umbrella on this clear sunny day just before the motorcade came into the kill zone. Kennedy assassination experts profess that it was opened just before the shots were fired. They say when he closed it the gun fire began. This man came to be known as the “Umbrella Man” and his curious behavior at the scene of the JFK assassination has lingered for fifty odd years.

Was this fellow, standing in Dealey Plaza with an open umbrella with no rain in sight part of the conspiracy? Here are two video’s that captures umbrella man from the NOVA documentary: Here is the first one, and here is the second. It is worth mentioning that some conspiratorialists claim that the umbrellas are different, having a different number of spokes. Decide for yourself.

What was the point of an umbrella in Dealey Plaza? It is said that it was an attempt to heckle Kennedy as a reminder of the appeasement policies of British Prime Minister Nevill Chamberlain, whose weak posture toward Hitler was supported by Kennedy’s father.

One of the more bizarre theories about the Umbrella Man comes from Robert Cutler. Cutler claimed that the umbrella was a weapon firing a flechette (poisoned dart) that hit Kennedy in the throat, paralyzing Kennedy to set him up for the head shot. Here is Cutler’s drawing of this concept.

There was also another man with Umbrella Man that day that came to be known as the so-called “Dark Complected Man”. He was named that because his complexion was his most readily identifiable feature in photos from November 22. The Dark Complected Man is without question an extremely important character and maybe even more deserving of scrutiny than Umbrella Man.

Dark Complected Man, like Umbrella Man, was on the Grassy Knoll, and, like Umbrella Man, appears to reasonable observers to have been signaling. At the precise moment that JFK’s car passed the Umbrella Man opened and pumped his umbrella repeatedly while the Dark Complected Man shot his fist up into the air. To some, this man seemed to be calling for a halt to the presidential limo, which did in fact either come to a complete halt or slowed down to a crawl.

It’s not just their actions at the moment that Kennedy’s head is blown apart. It’s how they behave afterwards. You will see from the videos below that both acted very different than everyone else after the shooting.

Disclaimer: The information contained in this series is that of the presenters and does not necessarily reflect the views of the author. It is information that is in the public domain provided for the reader to form an opinion. Whereas, it is the author’s position that the most profound sin is a tragedy unremembered and the absence of truth. And that’s my thought provoking perspective…

“The Day The Dream Died”…

Welcome to Thought Provoking Perspectives a blog designed to be a potent source of empowering knowledge to broaden the information base with those who share my passion for the written word and the empowerment of thought. END_OF_DOCUMENT_TOKEN_TO_BE_REPLACED
This entry was posted on Thursday, November 19th, 2015 at 5:56 am and tagged with African American, America, government, guns, history, jim crow era, John F. Kennedy, justice, murders, PBS, Politics, President Johnson, racism and posted in African American, GOP, history, Music, Obama, Politics, Republican. You can follow any responses to this entry through the RSS 2.0 feed.
« Previous Post
The Day Innocence Died: The Suspects »

One response to “The Day Innocence Died: Umbrella Man”