The Day Innocence Died: The Suspects 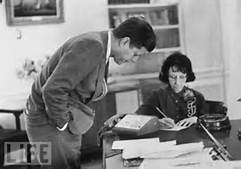 The list of alleged suspects who may or may not be involved in the murder of JFK are many, although officially as far as the Warren Commission was concerned there was only one – Lee Harvey Oswald, which some say was a rush to judgment. The former secretary of President John F. Kennedy made a list of suspects she believed were behind his assassination immediately after he was gunned down in Texas.

The JFK assassination in 1963 has long been the subject of conspiracy theories, ranging from those behind the murder to doubts about the lone assassin theory. But even before those conspiracies were aired Lincoln had her own suspicions. She was riding in the motorcade with Kennedy when he was shot dead allegedly by Lee Harvey Oswald in Dallas, Texas that day.

As Evelyn Lincoln, Kennedy’s personal secretary flew home on Air Force One that day she jotted down the names of those she suspected of involvement in the killing. The suspects that topped her list were Richard Nixon and the country’s vice president Lyndon Johnson. Johnson was sworn in only a few hours after the murder that shocked the world.

Lincoln jotted down the names of people she suspected who could have been behind the killing. Other suspects on her list were Teamsters boss Jimmy Hoffa, the KKK, Dixiecrats, the John Birch Society, South Vietnam President Ngo Dinh Diem, CIA in Cuban fiasco, Dictators and Communists. Few in the public have ever seen this note. On the back of the list is another note, written more than 20 years later when she passed on her letters to Kennedy collector Robert White.

‘There is no end to the list of suspected conspirators to President Kennedy murder. Many factions had their reasons for wanting the young president dead. That fact alone illustrates how the world suffers from a congenital proclivity to violence,’ it reads.

The 10-month Warren Commission set up to investigate the assassination concluded that Lee Harvey Oswald acted alone in assassinating the president. There are many others including Mrs. Lincoln who thought differently, because it shows she believed from the very beginning “this dog just don’t hunt”. The video’s below talks about other suspects – take a moment to view – you decide.

Disclaimer: The information contained in this series is that of the presenters and does not necessarily reflect the views of the author. It is information that is in the public domain provided for the reader to form an opinion. Whereas, it is the author’s position that the most profound sin is a tragedy unremembered and the absence of truth. And that’s my thought provoking perspective…

More to come on “The Day The Dream Died”…

Welcome to Thought Provoking Perspectives a blog designed to be a potent source of empowering knowledge to broaden the information base with those who share my passion for the written word and the empowerment of thought. END_OF_DOCUMENT_TOKEN_TO_BE_REPLACED
This entry was posted on Friday, November 20th, 2015 at 5:46 am and tagged with African American, America, government, history, jim crow era, John F. Kennedy, justice, Legacy, murders, Nixon, PBS, Politics, President Johnson, race, Republican and posted in African American, black issues, GOP, history, Music, Obama, police brutality, Politics, racism, Republican. You can follow any responses to this entry through the RSS 2.0 feed.
« The Day Innocence Died: Umbrella Man
The Day Innocence Died: Jim Garrison »