The Biggest Issue Of Our Time

In today’s world, everyone with an issue feels their issue is the biggest issue we face. The LBGT community calls their issue the “New Civil Rights” issue. There are many who say it is health care; others will say it Women’s Rights”; still others will say its “Race” and the list goes on and on… Now, equality is involved in the grievances of whoever has an issue. I agree with all who face discrimination! However, I happen to believe, notwithstanding anyone’s issue, that the biggest issue we face as humans is that of “Income Equality.”

Regardless of where you live without money, you are a slave. Let me ask, when was the last time you got a pay raise. Facts indicate that the income for what we commonly refer to as the 1% have increased significantly and often. Here in America the imposed Free Trade Agreements foster low wages because sending jobs offshore significantly impede both jobs and wages. This is not just an American issue – it is a worldwide concern.

In his “apostolic exhortation,” Pope Francis recently stated that “today we… have to say ‘thou shalt not’ to an economy of exclusion and inequality.” President Obama has remarked that the result of technological, social and political change “is an economy that’s become profoundly unequal and families that are more insecure.” These two men are the two most powerful men in the world; the Pope and the president saying the same thing and neither does anything about it.

Between 1870 and 2000, distribution of incomes of world households became hugely unequal. What does not seem to matter where you were born wealth remains with a relatively few people. If global inequality has indeed fallen, that would be the first time in two centuries. Any small reduction in inequality is the consequence of two off-setting forces: relatively fast growth of average incomes in some very large poor countries, notably China and India, and rising inequality within almost all countries, notably including China.

The level of concentration of income in America has not been constant throughout its history. The rich get richer, and the poor get poorer! Going back to the early 20th Century, when income statistics started to become available, there has been a “great economic arc” from high inequality “to relative equality and back again,” in the words of Nobel laureate economist Paul Krugman. In a New York Times editorial, Krugman suggests that those numbers do indeed show that today the top 10 percent now has half of all U.S. income.

In 1915, an era in which the Rockefellers and Carnegie dominated American industry, the richest 1% of Americans earned roughly 18% of all income. By 2007, the top 1 percent account for 24% of all income. In between, their share fell below 10% for only three decades. Concerning the nation’s wealth, rather than income as of 2011; the top 1 percent control 40 percent of all wealth.

At the same time, the federal minimum wage for American workers is $7.50 per hour. Unemployment has remained around 8% for a decade. The government cuts assistance for help to the needy in both unemployment and food stamp programs. The recent presidential candidate actually said, 47% of Americans he could forget and they did not count.

Let me leave you with this: there was a horrible system sanctioned by the government called slavery. In comparing the way the system is working for most Americans is very much like slavery with the difference being the new masters practices what I called the Judas Principle – no conscience and they have sold their souls for… SILVER! Therefore, the age old practice of divide and conquer works as we see on group pitted against another. When the real issue, the common issue, we all face is “Income and Equality.” And that’s my thought provoking perspective… 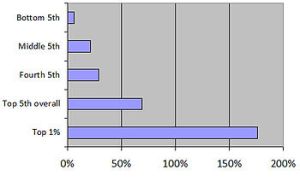 Welcome to Thought Provoking Perspectives a blog designed to be a potent source of empowering knowledge to broaden the information base with those who share my passion for the written word and the empowerment of thought. END_OF_DOCUMENT_TOKEN_TO_BE_REPLACED
This entry was posted on Sunday, April 3rd, 2016 at 6:32 am and tagged with African American, America, civil rights, crime, current-events, government, history, jail, justice, Native Americans, PBS, Politics, racism, religion, Republican and posted in African American, black issues, civil rights, education, GOP, history, Obama, Politics, racism, Republican, slavery. You can follow any responses to this entry through the RSS 2.0 feed.
« Happy Birthday Marvin Gaye
Revolutionary Daily Thought »