The Aftermath Of Integration 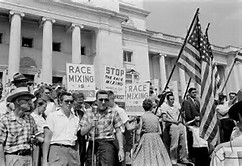 I recently had a conversation with a group of young people, none of which lived during the age of government segregation. Each had strongly convoluted opinions about the era that were not based in fact. This made me think about how much the current world view has changed the reality of black life, as it relates to a historical perspective.

First, white folk never wanted it and chatted go back to Africa at the time. It was never intended to be fair or equal! I am not suggesting that integration should not have happened, but it did have a negative impact on black life and the future of African Americans in many ways. Two prominent ways were in the areas of family and black business.

One thing that happened, for sure was that the black community stopped supporting the businesses in their own communities. After segregation, African Americans flocked to support businesses owned by whites and other groups, causing black restaurants, theaters, insurance companies, banks, etc. to almost disappear. Today, black people spend 95 percent of their income at white-owned businesses. Even though the number of black firms has grown 60.5 percent between 2002 and 2007, they only make up 7 percent of all U.S firms and less than .005 percent of all U.S business receipts.

I took the opportunity to educate these young people that in 1865, just after Emancipation, 476,748 free blacks – 1.5 percent of U.S. population– owned .005 percent of the total wealth of the United States. Today, a full 135 years after the abolition of slavery, 44.5 million African Americans – 14.2 percent of the population — possess a meager 1 percent of the national wealth.

If we look at relationships from 1890 to 1950, black women married at higher rates than white women, despite a consistent shortage of black males due to their higher mortality rate. According to a report released by the Washington DC-based think tank the Urban Institute, the state of the African American family is worse today than it was in the 1960s, four years before President Johnson passed the Civil Rights Act.

In 1965, only 8 percent of childbirths in the black community occurred out of wedlock. In 2010, out-of-wedlock childbirths in the black community are at an astonishing 72 percent. Researchers Heather Ross and Isabel Sawhill argue that the marital stability is directly related to the husband’s relative socio-economic standing and the size of the earnings difference between men and women.

Instead of focusing on maintaining black male employment to allow them to provide for their families, Johnson passed the Civil Rights Act with full affirmative action for women. The act benefited mostly white women and created a welfare system that encouraged the removal of the black male from the home. Many black men were also dislodged from their families and pushed into the rapidly expanding prison industrial complex that developed in the wake of rising unemployment.

Since integration, the unemployment rate of black men has been spiraling out of control. In 1954, white men had a zero percent unemployment rate, while African-American men experienced a 4 percent rate. By 2010, it was at 16.7 percent for Black men compared to 7.7 percent for white men. The workforce in 1954 was 79 percent African American. By 2011, that number had decreased to 57 percent. The number of employed black women, however, has increased. In 1954, 43 percent of African American women had jobs. By 2011, 54 percent of black women are job holders.

The Civil Rights Movement pushed for laws that would create a colorblind society, where people would not be restricted from access to education, jobs, voting, travel, public accommodations, or housing because of race. However, the legislation did nothing to eradicate white privilege. Michael K. Brown, professor of politics at University of California Santa Cruz, and co-author of“Whitewashing Race: The Myth of a Color-Blind Society” says in the U.S., “The color of one’s skin still determines success or failure, poverty or affluence, illness or health, prison or college.”

Two percent of all working African Americans work for another African American’s within their own neighborhood. Because of this, professionally trained Black people provide very little economic benefit to the black community. Whereas, prior to integration that number was significantly higher because of segregation people in the black community supported each other to sustain their lives and families.

The Black median household income is about 64 percent that of whites, while the Black median wealth is about 16 percent that of whites. Millions of Black children are being miseducated by people who don’t care about them, and they are unable to compete academically with their peers. At the same time, the criminal justice system has declared war on young Black men with policies such as “stop and frisk” and “three strikes.”

Marcus Garvey warned about this saying:

“Lagging behind in the van of civilization will not prove our higher abilities. Being subservient to the will and caprice of progressive races will not prove anything superior in us. Being satisfied to drink of the dregs from the cup of human progress will not demonstrate our fitness as a people to exist alongside of others, but when of our own initiative we strike out to build industries, governments, and ultimately empires, then and only then will we as a race prove to our Creator and to man in general that we are fit to survive and capable of shaping our own destiny.”

Maybe this proves that once past truths are forgotten, and the myths that are lies are born with an unfounded reality detrimental to all, but those who seek to benefit. As I have often said, “I firmly believe education is the single most important ingredient necessary to neutralize those forces that breed poverty and despair. We can change the world but first, we must change ourselves.” And that’s my thought provoking perspective…