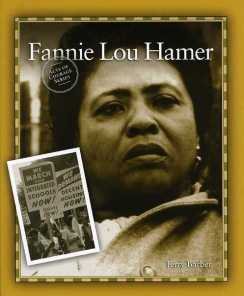 Fannie Lou Hamer was one of the most courageous civil rights activist who was famous for saying she was sick and tired of the condition of black people, stood up and took a stand. She used a passionate depiction of her own suffering in a racist society helped focus attention on the plight of African Americans throughout the South. While working with the Student Nonviolent Coordinating Committee (SNCC) in 1964; Hamer helped organize the 1964 Freedom Summer African American voter registration drive in her native Mississippi.

Born Fannie Lou Townsend on October 6, 1917 in Montgomery County, Mississippi the daughter of sharecroppers, Hamer began working the fields at an early age. Her family struggled financially, and often went hungry. In the summer of 1962, she made a life-changing decision to attend a protest meeting. She met civil rights activists there who were there to encourage African Americans to register to vote.

Hamer became active in helping with the voter registration efforts, which few in Mississippi were brave enough to do. Hamer dedicated her life to the fight for civil rights, working for the Student Nonviolent Coordinating Committee (SNCC) after going involved with the struggle. This organization was comprised mostly of African American students who engaged in acts of civil disobedience to fight racial segregation and injustice in the South. These acts often were met with violent responses by angry whites.

At the Democratic National Convention later that year, she was part of the Mississippi Freedom Democratic Party, an integrated group of activists who openly challenged the legality of Mississippi’s all-white, segregated delegation. For her devotion and commitment she paid a heavy price. She was beaten within an inch of her life. So brutally that it took months for her to recover but she never gave up the fight.

During the course of her activist career, Hamer was threatened, arrested, beaten, and shot at but none of these things deterred her from her work. In 1964, Hamer helped found the Mississippi Freedom Democratic Party, which was established in opposition to the state’s all-white delegation to that year’s Democratic convention. She brought the civil rights struggle in Mississippi to the attention of the entire nation during a televised session at the convention.

The next year, Hamer ran for Congress in Mississippi but was unsuccessful in her bid. Along with her political activism, Hamer worked to help the poor and families in need in her Mississippi community. She also set up organizations to increase business opportunities for minorities and to provide childcare and other family services.

Hamer died of cancer on March 14, 1977 from cancer. The encryption on her tombstone denotes her famous quote, “I am sick and tired of being sick and tired.” I’ll ask, when will this statement impact your life, whereas you will affect change. Mrs. Hamer put her life on the line for freedom. The next time you look in the mirror, ask yourself – WOULD YOU? And that’s my Thought Provoking Perspective…

Welcome to Thought Provoking Perspectives a blog designed to be a potent source of empowering knowledge to broaden the information base with those who share my passion for the written word and the empowerment of thought. END_OF_DOCUMENT_TOKEN_TO_BE_REPLACED
This entry was posted on Tuesday, June 6th, 2017 at 5:59 am and tagged with African American, America, black history, civil rights, CNN, Fannie Lou Hamer, GOP, jim crow era, Mississippi, NAACP, PBS, racism, slavery, SNCC, Uncategorized and posted in African American, black issues, civil rights, education, GOP, history, Obama, police brutality, Politics, racism, Republican, slavery. You can follow any responses to this entry through the RSS 2.0 feed.
« Previous Post
President Shady »