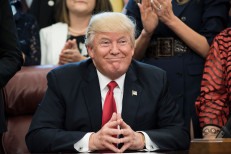 As stunning as this sounds, fresh evidence arrives every day of the government treating the man elected to lead it as someone talking mostly to himself. This man calls his untruths truthful exuberance or alternative facts! I will use a word white folk use – flabbergasted! In your relationships with anyone a lie is usually a deal breaker. It is now to the point, remarkably, the extent to which his senior officials act as if Trump were not the chief executive. Everyday a new lies is told and sometimes several at a time. Never has a president been so regularly ignored or contradicted by his own officials. HE LIES!

Federal officials aren’t the only ones. Police chiefs distanced themselves from Trump’s public call for rougher treatment of criminal suspects but the White House said the president was joking. Even the Boy Scouts have complained about him saying is an apology for Trump’s odd, politically charged remarks to the group. After Trump claimed in an interview that the Boy Scouts chief had called to declare it “the greatest speech ever made to them,” the Scouts organization disclaimed any such call.

But the phenomenon has grown more pronounced as Trump keeps struggling to govern amid special counsel Robert Mueller’s Russia investigation. Also, an extremely low new rating – the lowest in history – 36%! But somehow he sees everything as great and claims the admistration is working like a well oiled machine – NOT!

Trump keeps casting doubt on Russia’s culpability for cyber attacks on the 2016 election campaign. His own national security officials, including Director of National Intelligence Dan Coats and CIA Director Mike Pompeo, said last month they have no doubts.

Part of the disconnect flows from Trump’s inattention to, and weak grasp of, complex policy issues. With the multiple firing, all of them were the “best people”. Those people may even include his new chief of staff, retired Marine Gen. Kelly. Ten days after Trump installed Scaramucci with the rare status of reporting directly to the president, Kelly fired him Monday in his own first day on the job.

Let me suggest that you pay no attention to the nonsense that comes out of his mouth. Rather, look at the destructive things that are being done that’s not talked about. Let me use one of his favorite words – so far his presidency is a disaster! And that’s my thought provoking perspective…

Welcome to Thought Provoking Perspectives a blog designed to be a potent source of empowering knowledge to broaden the information base with those who share my passion for the written word and the empowerment of thought. END_OF_DOCUMENT_TOKEN_TO_BE_REPLACED
This entry was posted on Thursday, August 3rd, 2017 at 10:53 am and tagged with commentary, Dodgers, news, Politics, President, truth, Uncategorized and posted in African American, black issues, civil rights, education, GOP, history, police brutality, Politics, racism, Republican. You can follow any responses to this entry through the RSS 2.0 feed.
« The Powerless Of Blackness
The New Attack On Affirmative Action »