The One Hundred Day Disaster 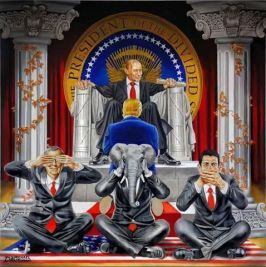 First, let’s be clear the whole election was motivated and won because of race and the black man once elected to lead America. I have always said to white folk that if you hate the black part of him, try loving the white part; after all – his mother was white.

Therefore, it is also clear that the person chiefly responsible for the racist and bogus birther claim was elected president for that very reason. Everybody knows that race has always been the driving America’s force in policy making to protect and benefit white folk! This guy railed about and against everything thing Obama did and he has done all those things himself.

So white folk got together and claimed to want a razzle-dazzle President says outrageous, untrue and inconsistent things in the hope of generating headlines or as they said to take back their country. They failed to scrutinize any of his deplorable actions and now we face the very real possibility of  war and the collapse of America. So it’s no surprise that #45 is disparaging the inevitable results-oriented First 100 Days reviews.

He has signed a huge number of executive orders and nothing else; meaning he has failed to do anything for the people only for his family and rich friends. This man is unqualified, unfocused, unprincipled, divisive, shallow and nasty solipsist has been outmatched by a once-fooled national media, plus an unexpected Democratic pushback on the streets, in town halls, in Congress and in court. So far current polling shows Trump holding on to the lowest approval rating of any newly elected president in modern times.

Instead, let’s apply this axiom to his time in office; “facts do not cease to exist because they are ignored.” By the standards of legislation, strategy, popularity and national purpose, 45 has been a failure; an epic failure so far, with the prospect of more failures to come. Unless or until he is impeached! Why this happened is hidden in plain sight. It goes back to racism! There used to be a saying “white is right” and no matter what their offenses are overlooked.

One other element turns this into a political bonfire: Next to none of his bellowing, reactionary assumptions are true. His claim of building a wall again goes back to racism. Refugees don’t commit more crime, net immigration from Mexico is near zero, climate change is real, people want health insurance and meals on wheels, and giving more money to the top 0.1% makes them, not us, richer.

No, unlike Caligula, he has not named his horse first consul. But day after day, everything seems to be driven not by strategy and facts but only by vanity, money and family (his). “Yelling fake news,” wrote columnist Eugene Robinson “cannot mask a fake presidency.”

The only thing 45 can lay claim too is that he did give the country a conservative justice to the Supreme Court. Of course, he like any good performance artist, 45 has been frequently photographed with applauding appointees signing numerous minor executive orders and, pending judicial review, repealing recent Obama administration rules to protect workers, investors and our waterways. On the merits, these appear to be anti-accomplishments.

Trump has been a Lord of the Lies. For example, the FBI, Jeff Sessions, Mitch McConnell and Paul Ryan have said that President Barack Obama did not criminally wiretap Trump. Mean while, 45 dismiss all evidence of collusion between his campaign and the Russians as “fake news” despite just about everybody working on his campaign seemed to have Russian interactions that the FBI is investigation as a criminal probe.

More troubling, he calls the media “the enemy of the people,” disparaging the independent judiciary and “so-called” judges, and trying to suppress voting rights, he appears to have more in common with Putin and other dictators around the world.

In short, all his failures and failings over 100 Days appear ominous. He doesn’t seem to have the capacity, discipline or motivation to grow into the job. It is very hard to change your habits and personality when you are over 70 years old; his lying, bullying, adolescent tweedicts, contempt for law and norms appear unalterable. This time in office has been a disaster! And that is my thought provoking perspective…