The Man Behind The Dream

It’s been more that fifty years since the March on Washington became the crowning achievement of the Civil Rights Movement. Rev. Dr. Martin Luther King Jr. is now remembered with a memorial on the National Mall. This is a major accomplishment for his legacy and a testament to his living spirit. I am very proud and honored to have live long enough to see the first man of color to receive such distinction and to have a president of color unveil the monument to this great man.

Dr. King now has reached his place of immortality and as marvelous as this is I wondered if anyone knows the man whose shoulders he stood. One person in particular would be the chief organizer of the March on Washington, who some have called the man behind the dream. I thought it would be fitting to give props to the man responsible for making the historic March on Washington a reality – Bayard Rustin. He was one of the most important leaders of the civil rights movement from the advent of its modern period in the 1950s until well into the 1980s.

Although his name is seldom mentioned or receives comparatively little press or media attention, while others’ were usually much more readily associated with the movement. Mr. Rustin’s role was a behind-the-scenes role that, for all its importance, never garnered him the public acclaim he deserved. Rustin’s homosexuality and early communist affiliation probably meant that the importance of his contribution to the civil rights and peace movements would never be acknowledged.

Rustin was a gifted and successful student in the schools of West Chester, both academically and on his high school track and football teams. It was during this period of his life that Bayard began to demonstrate his gift for singing with a beautiful tenor voice. He attended Wilberforce University and Cheyney State Teachers College. In 1937 he moved to New York City, where he was to live the rest of his life.

It was at this time that Rustin began to organize for the Young Communist League of City College. The communists’ progressive stance on the issue of racial injustice appealed to him. He broke with the Young Communist League and soon found himself seeking out A. Philip Randolph head of the Brotherhood of Sleeping Car Porters who at that time was a leading articulator of the rights of Afro-Americans.

He soon headed the youth wing of a march on Washington that Randolph envisioned. Randolph called off the demonstration when President Franklin D. Roosevelt issued Executive Order No. 8802, forbidding racial discrimination in the employment of workers in defense industries. Randolph’s calling off of the projected march caused a temporary breach between him and Bayard Rustin, and Rustin transferred his organizing efforts to the peace movement, first in the Fellowship of Reconciliation and later in the American Friends Service Committee, the Socialist Party, and the War Resisters League.

In 1944, Rustin was found guilty of violating the Selective Service Act and was sentenced to three years in a federal prison. In March 1944, Rustin was sent to the federal penitentiary in Ashland, Kentucky. He then set about to resist the pervasive segregation then the norm in prisons in the United States, although faced with vicious racism from some of the prison guards and white prisoners, Rustin faced frequent cruelty with courage and completely nonviolent resistance.

On release from prison, Rustin got involved again with the Fellowship of Reconciliation, which staged a journey of reconciliation through four Southern and border states in 1947 to test the application of the Supreme Court’s recent ruling that discrimination in seating in interstate transportation was illegal. Rustin’s resistance to North Carolina’s Jim Crow law against integration in transportation earned him twenty-eight days hard labor on a chain gang, where he met with the usual racist taunts and tortures on the part of his imprisonment.

Between 1947 and 1952, Rustin traveled first to India and then to Africa under the sponsorship of the Fellowship of Reconciliation, exploring the nonviolent dimensions of the Indian and Ghanaian independence movements. In 1953, Rustin was arrested for public indecency in Pasadena, California, while lecturing under the auspices of the American Association of University Women. It was the first time that Rustin’s homosexuality had come into public attention, and at that time homosexual behavior in all states was a criminal offense.

In 1956, Rustin was approached by Lillian Smith, the celebrated Southern novelist who authored Strange Fruit, to provide Dr. Martin Luther King with some practical advice on how to apply Gandhian principles of nonviolence to the boycott of public transportation then taking shape in Montgomery, Alabama. Rustin spent time in Montgomery and Birmingham advising King, who had not yet completely embraced principles of nonviolence in his struggle. By 1957, Rustin was busy playing a large role in the birth of the Southern Christian Leadership Conference and in the Prayer Pilgrimage to Washington that took place on May 17, 1957 to urge President Eisenhower to enforce the Supreme Court’s 1954 ruling that the nation’s schools be desegregated.

Arguably the high point of Bayard Rustin’s political career was the March on Washington for Jobs and Freedom which took place on August 28, 1963, the place of Dr. Martin Luther King’s stirring “I Have a Dream” speech. Rustin was by all accounts the March’s chief architect. To devise a march of at least a quarter of a million participants and to coordinate the various sometimes fractious civil rights organizations that played a part in it was a herculean feat of mobilization.

By 1965, Rustin had come to believe that the period for militant street action had come to an end; the legal foundation for segregation had been irrevocably shattered. Rustin’s steadfast opposition to identity politics also came under criticism by exponents of the developing Black Power movement. His critical stance toward affirmative action programs and black studies departments in American universities was not a popular viewpoint among many of his fellow Afro-Americans, and as at various other times of his life Rustin found himself to a certain extent isolated.

Although Bayard Rustin lived in the shadow of more charismatic civil rights leaders, he can lay real claim to have been an indispensable unsung force behind the movement toward equality for America’s black citizens, and more largely for the rights of humans around the globe, in the twentieth century. Throughout his life his personal philosophy, incorporating beliefs that were of central importance to him: that there is that of God in every person, that all are entitled to a decent life, and that a life of service to others is the way to happiness and true fulfillment.

Let’s not let the dream die! All of us stand upon the shoulders of someone be it great or not. And that’s my Thought Provoking Perspective… 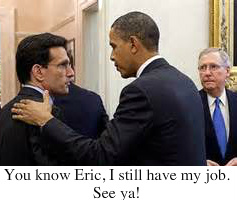 The most amazing thing happened Tuesday night that marked the first time since 1899 that the House majority leader was defeated in a primary election; and badly I might add. The prevailing wisdom, at least according to the winner, Cantor was too liberal. Fact of the matter, Cantor should be ashamed of his twelve year tenure because he did nothing and was part of the worst congress in the country’s history, commonly known as “the Do Nothing Congress”.

You proclaimed himself one of the “Young Guns” of the Republican Party, which is nothing more than a code-word for the “New Jim Crow”. This guy was in line to be the next Speaker of the House when John Boehner decided he was tired of herding the opposition. The majority leader was the number two man in congress and the third most powerful republican in Washington. He was also an Arden voice against the president, yet he called himself a patriot.

His loss was devastating and a humiliating defeat. It was sweet vindication that the Republican strategy of stoking up faux-populism of just saying no and never proposing a solution to any problem has blown up spectacularly. Because in their gorgeously gerrymandered districts, their own voters felt things like shouting down the government didn’t go far enough. They said; government is the problem to which I would agree because it was Cantor and folks like that is the problem.

Moving on; the problem as I see it, if Cantor was too liberal – what do you think the guy who beat him to take his place will be like. The endpoint of this insane ideology is the election of a Tea Partiers that if like the rest are not interested in governing at all. Rather dismantling government. It is the mission of the institutional Republicans to gamble that obstructionism alone would give them power are seeing their fortunes turn, and their majority become meaningless.

They simple don’t want any government action on any issue. They want the current trend to continue to allow states rights to be the objective where individual municipalities push forward minimum wage laws because the federal government is paralyzed. Meanwhile, the gap between the rich and the poor widens every day, and Republicans have convinced many rural Americans that the problem is the tax rate on the wealthy. He also voted all of the fifty plus times to take healthcare away from American citizens.

In an even more satisfying irony because Cantor was one of the greatest proponent of not cooperating with the administration on every piece of legislation proposed by the president. He, along with his compatriot Paul Ryan, instead has championed “broadening the tax base,” otherwise known as taxing the poor.

So overnight, he became a political dead man walking within hours of his defeat and resigned from his leadership position. So forgive me for having little joy in my heart, even if it means we get another Tea Partier in the House. For a bit, it feels as though there is some sense of justice for the left. No matter how much power you accumulate, your own monstrous sentiments can come back to bite you. And that’s my thought provoking perspective…

Person Of The Day: Marian Anderson

Person Of The Day: Marian Anderson