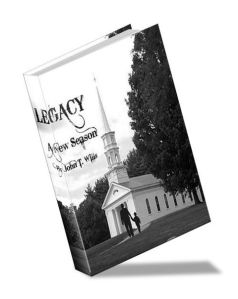 It’s been several years since “Just a Season” and it’s time to move on. Generations have come and gone, life is bearable after all, and hope lives in a little boy and in a man who almost lost all hope.

It’s been said that there are no words that have not been spoken and no stories that have never been told but there are some that you cannot forget! “Legacy – A New Season” is the perfect complement to that statement. It is the sequel and the continuation of “Just a Season” and a stand-alone story rich in history on a subject rarely explained to children of this generation concerning the African American struggle.

This long awaited saga to the epic novel “Just a Season” will take you on an awe inspiring journey through the African American Diaspora, as told by a loving grandfather to his grandson in the oral African tradition at a time when America changed forever.

Upton – “The Jewell of the Chesapeake”

The next city in the “Brownsville Series” is Upton in Baltimore, Maryland where I found one of the most affluent African American neighborhoods in the United States at the turn of the twentieth century. As I continue my quest to resurrect the ghost of those honored segregated communities of a time long past I will examine the “Jewell of the Chesapeake”. If you’ve never been to Baltimore you’re really missing something special. Today, it’s called “Charm City” which should have been its name back in the day or at least that’s what Upton should have been called.

In Upton, Pennsylvania Avenue was the main drag connecting all African American life in the city and beyond. To the south and west of Upton was the poor and working class African American neighborhoods of “The Bottom”. To its east were the German American and Jewish American neighborhoods. Upton is about a fifteen minute walk from Downtown Baltimore but blacks of that era had no need to go downtown, for obvious reasons, they were not allowed to patronize or enter, through the front door anyway, the white establishments unless they were working.

Baltimore is best known for crabs, crab cakes, delicious seafood, and of course a good time. The neighborhood was home to the most educated African Americans, property owners, and professionals to include doctors, lawyers, retailers who served the middle class and an upscale clientele, jazz clubs, dance halls, and theaters, as well as other public and private institutions for the black community. On the Avenue, as it was called, was home to a premiere shopping strip for black Baltimorians, inspiring comparisons to Lenox Avenue in Harlem – Upton had it all.

Upton was also the staging ground for much of the local and national civil rights initiatives. It was a crossroad for many great African Americans who fought for equality and improving conditions for communities suffering from the ridged “separate but equal laws” and there cruel amoral agendas. People like the great Frederick Douglass, Justice Thurgood Marshall, Booker T. Washington, W.E.B. Du Bois, Marcus Garvey all visited Upton and organized in its local churches. The Baltimore chapter of the NAACP was based in Upton as well as the New Negro Alliance who rallied for justice from this proud community.

In the mid-20th century, Upton’s population swelled due to the popularity of the neighborhood and the pressures of segregation that kept African Americans confined to certain areas. Single family homes were subdivided into small apartments and Pennsylvania Avenue’s sidewalks were crowded on Saturday nights, as loud music and heavy drinking became popular vices on the strip. There were several notable venues hosting great entertainment like the New Albert Hall, Savoy and the Strands that drew many performers and partygoers.

But it was the Douglass Theater, renamed The Royal Theater, at Pennsylvania and Lafayette, that became famous and a mainstay on the Chitlin Circuit on par with the legendary Apollo Theater. Cab Calloway grew up in Upton and Eubie Blake performed his debut in a club on Pennsylvania Avenue. Stars such as Ethel Water, Pearl Bailey, Louis Armstrong, Fats Waller, James Brown, Stevie Wonder and the Temptations all performed at the Royal. It was like the Apollo in the sense that you had to play the Royal to get your chops.

Churches were also a huge part of this community providing safe havens for its people. Since the 18th Century, African American churches have nurtured their souls, feed the hungry, clothed and housed the poor but their roll was far more important. The church community was a launch pad for activism and served as communication networks, which was the backbone of the community. The church community fought for civil rights, supported business initiatives, and job placement. From the beginning going back beyond the Underground Railroad Baltimore’s churches were a place of empowerment through worship and serve as incubators for organizing and planning regardless of domination or faith.

Baltimore has produced prominent businessmen such as Raymond Haysbert who was the owner and founder of the famed Parks Sausage Company that became the first black-owned company to go public in 1969. The Parks Sausage Company was a legend in Baltimore and you could hear its slogan “more Parks Sausages mom” everywhere. After the company experienced financial difficulties two former National Football League Hall of Famers Lydell Mitchell and Franco Harris partnered to come to the rescue maintaining the company’s black-owned legacy. James Brown, the “Godfather of Soul”, was also a prominent businessman in the city owning WEBB, a local radio station, and several other businesses.

Upton also produced its share of colorful characters known as “hustlers” that were legendary. One of the most famous was “Little Willie” Adams. Mr. Adams or “Little Willie”, as he was known, opened a shoeshine stand on the Avenue when he was 18. Sources say he was an ambitious young hustler with dreams of being his own man. One day a flamboyant numbers man got in his chair, he popped his rag like a firecracker while talking jive making him laugh. He convinced the numbers man that he too was a businessman, solid and dependable, and he wanted in on the numbers game. The hustlers slapped palms and Little Willie started at the bottom the next day as a runner.

Hustling was a family business and Little Willie was taught by his grandfather who ran an after-hours gambling house on Madison Avenue were most of Baltimore’s established hustlers and entrepreneurs enjoyed their favorite vices. Little Willie was a welcome star at grand pop’s gambling house as he was eager to learn this way of life, as early as age seven. By age 34, the young dapper Adams was already a living legend and the King of B-more. Little Willie was known to say, after he became the numbers czar, “This was our thing started by slaves”. I’m told he would say that “prayer is good but when you get up off your knees. You’ve got to hustle”.

Then there was Mr. Melvin Williams who was the inspiration for the enormously popular HBO series “The Wire.” Known as “Little Melvin”, he has also been featured on “American Gangster” where he told his story, his way. Before he was old enough to shave Little Melvin possessed a genius I.Q. of 160 but he says it’s closer to 200. Little Melvin, a legend at age 15 years old had made a few hundred grand hustling pool and shooting dice. He’s a high school dropout who can talk tax codes, inner-state commerce, calculus and physics with the best of them. No one doubts that he was a prodigy in the gambling haunts and alleyways along glittering Pennsylvania Avenue.

When heroin addiction exploded in the 1960’s, Mafia drug traffickers sought out connections in big cities that were accustomed to dealing in large sums of cash and were smart enough to keep their mouths shut. They needed to look no further than to Melvin, known in street lore today as “the man who brought heroin to Baltimore.” For three decades Melvin ruled as the uncrowned king. Frustrated with their inability to penetrate his operation, Baltimore police framed him by planting a hand full of pills in his pocket during an orchestrated bust. Five years later, Melvin emerged from prison a bitter man out for revenge. He accomplished his mission accumulating untold millions in narco-profits but ultimately paid the price by serving 26.5 years in prison.

His street legend was larger than life, when the Baltimore riots erupted after the 1968 killing of Dr. Martin Luther King, Jr., there came a knock on Melvin’s door on the fourth morning of fire and rage. In walked National Guard Gen. George Gelston, state Sen. Clarence Mitchell III, and Police Maj. William “Box” Harris. “We think you can help stop the rioting,” they said. “We’ll give you a bullhorn and a bullet-proof vest.” Williams says he told them “I’ll take the bullhorn. Give the vest to Senator Mitchell.” That afternoon, as thousands stood at Pennsylvania Avenue and Mosher Street, Williams told the crowd that they’d expressed their rage, they’d made their point — and now it was time go home. The streets quickly emptied, and that day the riots were over.

In the 1960’s and 70’s, controversial urban renewal projects destroyed much of Upton’s historic architecture, especially in the southwestern portion of the neighborhood. However, it only replaced a portion of what was removed. Once the buildings were razed it was difficult to secure developers to build new construction. The famed Royal Theater was demolished in 1971. Further problems faced Upton during this time in the form of economic depression, housing abandonment, crime, and racial rioting.

Pennsylvania Avenue is now lined with sneaker shops, dollar stores, other low-rent commercial uses, and many abandoned storefronts. The Avenue Market sells produce and holds occasional events such as jazz shows. According to the city, 60% of Upton families with children under 5 are living in poverty. The median home sale price in Upton in 2004 (not including Marble Hill) was $28,054. Many of the row houses in the neighborhood are vacant, either abandoned by their property owners or owned by the city.

Yes, the ghost of what was our creation has been stained and the Jewell of the Chesapeake has lost its luster. Unfortunately, the city of Baltimore, known as Charm City, forgot that Upton was responsible for a large part of its charm but African Americans know it lure looms large and its legacy will never die.

Visit: www.justaseason.comJust a Season is a must read novel…