Well the stage is set! Mittman and Robber the conservatives dynamic dual, different from Batman and Robin, will destroy America as appose to saving it. We thought the last republican candidates for president was scary – these two appear to be the nightmare on our street. Maybe I’ll put it this way – these two will make the last republican president look like a girl scout. If they win the election in November – we should be very afraid!!!

This pair of impractical ideologues with excessive confidence in their own moral righteousness could do what the George Wallace and Bull Connor types could only imagine. I am not one to get into the business of giving Godly advice but I think it’s time to pray to your higher power. Since the Boy Wonder is now on the scene, let me just touch on this guy who could be a heartbeat from the throne. I have a feeling a lot more material is coming.

First, Ryan is not a “fiscal conservative.” A fiscal conservative pays for the government he wants. Ryan never has. His early “Roadmap for America’s Future” didn’t balance the budget until the 2060s and added $60 trillion to the national debt. Ryan’s revised plan, passed by the House in 2011, wouldn’t reach balance until the 2030s while adding $14 trillion in debt. It adds $6 trillion in debt over the next decade alone — yet Republicans had the chutzpah to say they wouldn’t raise the debt limit! I remain mystified why President Obama never hammered home this reckless contradiction by insisting that the GOP “raise the debt ceiling just by the amount it would take to accommodate the debt in Paul Ryan’s budget.”

Ryan is an extreme “small government conservative.” Ronald Reagan ran government at 22 percent of gross domestic product when our population was much younger. Ryan and Romney want to run government at 20 percent of GDP even as the number of Americans on Social Security and Medicare doubles.

Even if we slow these programs’ growth, it’s impossible to shrink the federal role in an aging society this sharply without eliminating vast swaths of what Americans have come to expect from government — not to mention shortchanging already lagging investments in research and development and infrastructure. Over time, Ryan’s “vision” would decimate most federal activities beyond Social Security, Medicare and defense.

As an African American who knows what America was like not too long ago. It was the liberals agenda that created the enduring achievements of civil rights to environmental laws to Medicare out of boldness and compassion. Ask yourself a few questions and carefully consider the consequences.

How can Ryan justify his Medicaid cuts when, as the nonpartisan Kaiser Family Foundation found, they would likely leave 14 million to 19 million poor people without health coverage? How can he justify tax proposals that, as The New Republic’s Alec MacGillis pointed out, would reduce the rate on Mitt Romney’s rather substantial income to less than 1 percent? How can he claim his budgets are anti-deficit measures when, as The Post’s Matt Miller has noted, his tax cuts would add trillions to the debt and we wouldn’t be in balance until somewhere around 2030?

Finally, the Boy Wonder wants to cut Social Security, yet he was raised on it. Ironic isn’t it that you have paid your money into it and he wants to take it away or hope you die before you can use it. There’s a belief in some quarters that the world will end, as the Mayan’s predict, on December 21, 2012. I predict that if these two win in November – the world might just as well have ended for millions of middle class Americans. And that’s my Thought Provoking Perspective…

I am an uncompromising history fanatic and some call me an expert, but I prefer to say I am one who seeks the truth. While we live in an era when so much history is being made we should be excited for the time in which we live. Last week, for example, we witnessed the Supreme Court’s affirmation of the president’s signature legislation the health-care law the Good Ol’ Boys call Obamacare. This was the most profound piece of legislation since the “New Deal”.

So let’s talk about Romney and his past. He started and built the venture capital and asset-management firm which was nothing more than a money-making machine. So what’s wrong with that? Well Bain Capital is a company that doesn’t and has never made anything; it invests. It spots trends, looks at promising companies tapping into those trends and then stakes its capital on improving a company, using Bain’s sector and financial experts to, as they say, help company’s get over a capital shortage or help it expand.

The companies that Bain identified and invested in, and not in a small way, while Romney was at the helm, were Microsoft, Stream Global Services, ModusLink, and StatsChipPac. These companies are now among the biggest outsourcing companies in the world, with call centers, factories and facilities, mostly in Asia, but also across the globe, that support U.S. high-tech companies. The mission of these companies was to help big U.S. companies outsource and offshore. And let me add that this strategy was and is designed to support a low wage business model.

Even his own Republican cohorts like Newt Gingrich said: “The Bain model is to go in at a very low price, borrow an immense amount of money, pay Bain an immense amount of money and leave. I’ll let you decide if that’s really good capitalism. I think that’s exploitation.” Then slick Rick of Texas said: “There is something inherently wrong when getting rich off failure and sticking it to someone else is how you do your business. I happen to think that that is indefensible.”

So if he can be eaten by his own, who by the way does not appear to think much of his thinking, raise the issue – then why can’t President Obama raise the issue? Frankly, the president should have done so during the debate on financial regulatory reform. I should say there’s nothing inherently wrong with private equity, which plays an important role in the economy. Let me add that there’s nothing wrong with wealth and those who risk their capital in private-equity ventures should be rewarded when those deals pay off.

Romney himself acknowledges that the free markets need rules and regulations in order to function and we know certain dealings are prohibited and should be criminal like insider trading. So it is reasonable to ask whether some highly leveraged buyout deals, of the kind that Bain and other private-equity firms often conduct, should fall into the same thumb-on-the-scale category as insider trading.

Suppose a company is failing and appears beyond rescue. Suppose a private-equity firm buys the company with borrowed money, burdens it with more debt, and then spends the next few years firing workers, selling assets, eliminating pension plans — all while collecting handsome “management fees.” If you can recall losses at the nation’s largest and supposedly best-run bank, JPMorgan Chase — at least $2 billion and perhaps much more.

This is what Rick Santorum said in March: “I heard Governor Romney here called me an economic lightweight because I wasn’t a Wall Street financier like he was. Do you really believe this country wants to elect a Wall Street financier as the president of the United States? Do you think that’s the kind of experience we need? Someone who’s going to take and look after, as he did, his friends on Wall Street and bail them out at the expense of Main Street America?”

If you read my thoughts and words you know I don’t think much of the GOP or their henchmen but I agree with Santorum in this instance where I have to ask the question is this the guy we want to be president. I will go further and say Romney’s personality traits remind me of the “Robber Barons” of old. I would suggest that this so-called “Job Creator” needs to go offshore where he and his buddy’s send jobs.

Would he do this to the American Treasury and the American people if he were to become president? I say, yes! And that’s my Thought Provoking Perspective…

WHEN YOU THOUGHT YOU’VE HEARD EVERYTHING 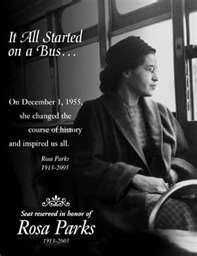 There is a huge legal battle going on in Detroit over the estate of civil rights icon Rosa Parks. There are lawyers, judges, and family fighting to see who controls the estate of “Mother Parks”.  Wayne County Probate Judge Freddie Burton Jr. was asked to disqualify himself and in what some have said is unusual he made a decision, which is he will let them know if he will in will continue to preside over the Parks’ estate fight.

Burton told lawyers in a five-minute hearing that he would issue a decision on the disqualification motion in 30-45 days without hearing legal arguments from lawyers in the case. Then, he ended the hearing, leaving lawyers to argue their positions with newspaper reporters.

“It’s outrageous that Judge Burton needs 30-45 days to decide a completely unopposed motion for disqualification,” said attorney Steven G. Cohen, of Farmington Hills, who sued Burton last week on the grounds that he conspired with probate lawyers John Chase Jr. and Melvin Jefferson Jr., allowing them to bankrupt Parks’ estate with unnecessary and excessive attorney fees. “He obviously can’t serve as a presiding judge in a case where he is the defendant.”

Cohen said Burton should have ruled this morning since the other lawyers in the case filed no written objections to his request. “This means the motion is unopposed and should be granted immediately,” Cohen said. Troy attorney Alan May, who represents Chase and Jefferson said Cohen’s accusations are outrageous.

Cohen represents Elaine Steele, Parks’ longtime friend and assistant, and the Rosa and Raymond Parks Institute, which Steele founded with Parks. Last week, Cohen sued Burton, Chase and Steele, on the grounds that they conspired to bankrupt Parks’ estate and strip Steele and the institute of their share of Parks’ historically valuable belongings and intellectual property rights.

The controversy is the latest development in a long-running battle that began after Parks’ death in 2005 when her nieces and nephews challenged her estate plan. Though Parks had selected Steele and retired 36th District Court Judge Adam Shakoor to handle her estate, Burton put longtime probate lawyers Chase and Steele in charge.

Instead of marshalling Parks’ assets and sitting on the sideline until Steele, the institute and the relatives settled their differences, Cohen said Chase and Jefferson waded into the fight and started billing the estate for legal fees.

In 2007 Steele, the relatives and the institute signed a confidential agreement giving the institute and Steele 80% of the proceeds from the sale of Parks’ belongings and the royalties from licensing Parks’ name. The relatives were to get the rest.

Last December, at Cohen’s request, the Michigan Supreme Court ordered Burton to put Steele and Shakoor back in charge of the estate. It also voided the forfeiture order. Cohen now wants Burton off the case and the lawyers to reimburse the estate for the legal fees their received.

May says Chase and Jefferson billed reasonable fees and improved the estate by recognizing the historic value of Parks’ belongings, which a New York City auction house is trying to sell to an institution that can display them. “Shameful.”

This may well be the first time I am at a loss for words as this woman fought for justice while living and her name must continue to fight. And that’s my Thought Provoking Perspective…

As report by David Ashenfelter of the Detroit Free Pree