Look in the Mirror 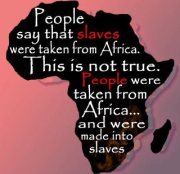 I want to ask you who are reading my words to look into the mirror and ask yourself: “Who am I?” This is important because you might, if honest, see a person that is the representative of your life. Let me explain, you say that you love a God who you have never seen; yet you do not love the man or woman who you can see.

The Bible says, “The will be wars and rumors of wars”. This is very interesting because this speaks to the interest of those who have a vested interest in this brutality. I am going to be more specific and relate this to Pharaoh in the sense he was the entity that was in control of man; then came Mosses to set his people free with the promise of leading them to the promise land.

If you think about this and understand that your enemies have invested in your soul that old tried and true principle of divide and conquer. I say this specifically to address the issues that exist between the African American male and female. God created us (man and woman) to join in a union to live and to recreate in order to continue the species. Now, how is it that we have lost this simple teaching. The war against us is against all of us, both black men and women.

Our hope rests within us – not in what is inserted into us by an enemy. So black women, you’ve been had, hoodwinked, when you distance yourself for the black man. There is a biblical passage that says “you will reap what you sow”. You have a convent with the black man by virtue of your birth – your children need him and so do you.

Black men, you too must be that man you were created to be. The children you create – need you; that woman needs you. Being black, you know that we mean nothing to those of the other hue – I say it time to mean something to each other. I will not judge either, just saying, while I will remind you that scripture says, “Judge not lest you be in danger of being judged”. The ghosts of the greats who sacrificed their lives for you are watching!

It is time for you/me/us to think differently and make a change – and the time is now! And that’s my Thought Provoking Perspective on this day of resurrection…