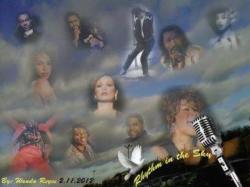 I began my day thinking about my dear son who transitioned and left this life some years ago. I like to think he is always with me and through pray he knows this. Then as I read today’s paper and read a story about the condition of Bobbi Kristina and felt deeply saddened that it appears she will not recover. As I continued, I remembered all of the friends and family who have passed.

My grandmother loved music, and I began to wonder what it must be like in heaven where the ghosts of the greats gather to sing in that heavenly choir. The harmony must be simply amazing. When these great artists were alive and with us black music – soul music – was awesome. Thankfully, they left us their gift to enjoy forever.

Times were much difficult for black people, but the struggle brought out such creative music from the souls of these greats be it in the secular world and in the church. Today’s black artists do not know what it is to be innovative and create their own music, and if they do, they do not have what I know as soul, you hardly feel anything. The late 90′s and into the 21st century was the worst time in the world of soul music. New generations start producing their music, then it negatively affects the black community, because they did not learn from the great artist that came before them or know what it means to be creative.

What I see and hear, for the most part, black music could be at the point of no return. Furthermore, the artists who are now deceased singing in that glorious choir in this place called heaven were originals who never imitated any other music artists to gain fame. These days, you have a lot of imitators, and this is one of the main reasons why we have no more black artist with real soul that touch our souls when they sing.

Moreover, it appears that the new generations have no knowledge of what soul music means or even how to just be an original artist. And that’s my Thought Provoking Perspective…

I wonder how many people realize how much Soul Train meant to our community and what it did for the African American pride. Let’s remember the show appeared less than a decade after society barred “collared music” from being heard on must media through a segregated program called “Race Music”.

So much of what is written on the pages of time is skewed or simply altered to fit His-Story. I have said many times “our story is the greatest story ever told”. We, as a people, have had the fortitude to make something out of nothing. Yes, and I know that is an understatement – but it is true. Through this writing, I want to pay homage to Don Cornelius who made something possible at a time when it was impossible.

I left for Vietnam in 1969. At that time, representation on television as it related to African American’s was basically nonexistent. Of course, there was the baboonery and unrealistic representations of who they wanted us to be or appear to the world. When I returned, a year and a half later, changed as a young man as well as the world I left behind. Thanks in large part to Mr. Soul Train. From the time of my return until the show ended, I devoted nearly every Saturday afternoon to viewing “Soul Train”.

The host of this groundbreaking show was a tall always stylishly dress host in the latest fashion; at least for the time. That man was Don Cornelius an enigmatic mélange of ambition, vision and begrudging affection, who like most old school show biz impresarios. African American’s knew that his rival American Bandstand did very little for the artist or our community at that time. Mr. Cornelius had the vision to create the hippest trip on television and dare I say in America.

Sadly the Soul Train creator ended his own life on February 1, 2012 with a single self-inflicted gunshot wound to his head that I would reverberated around the world. Mr. Soul Train was not just a great American story of triumph over travail; he was a hallowed symbol to the African American community.

He used his platform to change the world through its outstanding reflections of our pride and talent. The news of his suicide on the first day of Black History Month was a jarring way to enter a month-long celebration of the contributions of African Americas to the vitality and veracity of this nation and the world.

His mission was to shine a light, a bright light, on the African American culture through great music and to showcase the performers who in many cases had no other national platform. This included the known, unknown, and obscure literally making stars of them overnight. Soul Train was the powerful vehicle, and it became the longest running syndicated show on television, a black history fact to remember.

Watching Soul Train made you instantly cool, no matter if you were black, white or otherwise. Where else could you learn the latest dances, hippest fashions, and the next best way to rock that Afro and what products you had to have to keep it looking good? The legendary Soul Train Line was essential viewing. Can you remember those parties you attend on Saturday night’s after watching the show where you used the moves to do your own Soul Train line? It could be said that it raised your “Cool IQ”. Soul Train was a window into a world rarely seen by the world.

Mr. Cornelius stepped down as the host of Soul Train in 1993, but the show continued with a series of new hosts who continued his vision, inculcating a new generation of Soul Train devotees. Soul Train remained the hippest trip in American until it went off the air in 2006.

When Mr. Cornelius signed off on February 1, 2012, it was a tragic end to a long running iconic figure in American music. His contributions will never be forgotten or matched and his legacy will last – I wish him love, peace and soul. And that’s my thought provoking perspective…