One of the books I’ve published speaks to a subject rarely explained to children of this generation concerning the African American struggle. “Legacy – A New Season” is a stand-alone story rich in the history of the African American Diaspora. It is the sequel and the continuation of the novel “Just a Season”.

This long awaited saga to the epic novel “Just a Season” will take you on an awe inspiring journey through the African American Diaspora, as told by a loving grandfather to his grandson in the oral African tradition at a time when America changed forever. I wanted to share this particular excerpt from “Just a Season” that I hope it will enlighten, empower, motivate, and touch your heart.

Today we live in a world where there is no Granddaddy to share that precious wisdom necessary to guide our young men and women into adulthood. I was fortunate or maybe blessed, to have had a loving grandfather who shared many valuable lessons with me.

These lessons formed the foundation of my very being…

Excerpt from “Just a Season”

“Granddaddy would say if you really hear me, not just listen to me, you will inherit life’s goodness. I would hear him talk about things like “God bless the child that’s got his own.” He constantly reminded me that everything that ever existed came from a just-single thought, and if you can think it, you can figure out how to do it just put your mind to it.

I would also constantly hear that a man must be able to do what needs to be done when it needs to be done regardless of the circumstances. “I raised you to be a man and as a man, you don’t know what you will have to do, but when the time comes, do it.” Granddaddy drove home the point, the difference between a man and a boy is the lessons he’s learned.

Granddaddy would also say you will always have an enemy. Your enemy is anyone who attempts to sabotage the assignment God has for your life. Your enemy is anybody who may resent you doing positive things and will be unhappy because of your success. These people will attempt to kill the faith that God has breathed within you.

They would rather discuss your past than your future because they don’t want you to have one. Your enemy should not be feared. He would say it is important to understand that this person usually will be close to you. He would tell me to use them as bridges, not barricades. Therefore, it is wise to make peace with your enemy.

“Just remember these things I say to you.” I certainly could not count all of these things, as it seemed like a million or more that I was supposed to remember. However, he asked me to remember above all else that there is no such thing as luck. The harder you work at something the luckier you get. I would tell him that I was lucky, maybe because I had won a ballgame or something. He would smile and tell me luck is only preparation meeting opportunity. Life is all about survival and if you are to survive – never bring a knife to a gunfight. This would be just as foolish as using a shotgun to kill a mosquito. Then he asked me to remember that it is not the size of the dog in the fight; it is the size of the fight in the dog.

Granddaddy’s words had so much power, although it would often require some thinking on my part to figure out what he was talking about, or what the moral of the story was supposed to be. It may have taken awhile but I usually figured it out. For example, always take the road less traveled, make your own path, but be sure to leave a trail for others to follow. Life’s road is often hard; just make sure you travel it wisely. If you have a thousand miles to go, you must start the journey with the first step. During many of these lessons, he would remind me not to let your worries get the best of you.

Sometimes he would use humor. For example, he would say something like “Moses started out as a basket case.” Although most often he assured me that hard times will come and when they come, do not drown in your tears; always swim in your blessings. He would tell me he had seen so much and heard even more, in particular those stories from his early life when dreadful atrocities were done to Negroes. Some of the stories included acts of violence such as lynchings, burnings, and beatings. He would make a point to explain that the people who did these things believed they were acting in the best interest of society.

He would tell me about things he witnessed over time, that many of these atrocities were erased from the memory of society regardless how horrible the event was. Society’s reasoning would make you think their action was right, fair, and justified. Granddaddy would add, if history could erase that which he had witnessed and known to be true, how can you trust anything history told as truth? He would emphasize that I should never, never believe it, because nothing is as it seems.

I would marvel at his wisdom. He would tell me to always set my aim higher than the ground. Shoot for the stars because if you miss you will only land on the ground and that will be where everybody else will be. When he would tell me this, he would always add, please remember you are not finished because you are defeated. You are only finished if you give up. He would usually include a reminder. Always remember who you are and where you came from. Never think you are too big because you can be on top of the world today and the world can be on top of you tomorrow.

I think Granddaddy had the foresight to see that I could do common things in life in an uncommon way, that I could command the attention of the world around me. Granddaddy impressed upon me that change is a strange thing. Everyone talks about it but no one ever tries to affect it. It will take courage and perseverance to reach your place of success. Just remember that life -is not a rehearsal. It is real and it is you who will create your destiny don’t wait for it to come to you. He would say, can’t is not a word. Never use it because it implies failure. It is also smart to stay away from those who do use it.

He would tell me that I was an important creation, that God gave a special gift to me for the purpose of changing the world around me. It may be hard sometimes, you may not understand, you may have self-doubt or hesitation, but never quit. God gave it to you so use it wisely. He would add often times something biblical during his teaching, or so I thought, like to whom much is given, much is expected. It is because we needed you that God sent you. That statement profoundly gave me a sense of responsibility that I was duty-bound to carry throughout my life.

Granddaddy’s inspiration, courage, and motivation still humble me, and I’m filled with gratitude that his example profoundly enriched my soul. So much so that in those times of trouble, when the bridges are hard to cross and the road gets rough, I hear Granddaddy’s gentle voice reciting words once spoken by the Prophet Isaiah: “Fear not for I am with you.”

And that is a Thought Provoking Perspective from a loving Grandfather…

Praise for Just a Season

This Must Read Novel can be purchased through AMAZON 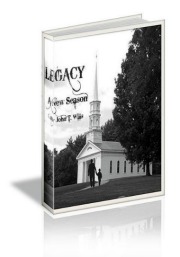