Ferguson: A Report from Occupied Territory 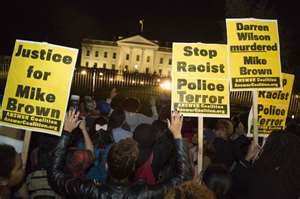 Let us not forget that over the last year more people of color [black people] have been killed by the police indiscriminately than at anytime in recent memory. Some compare it to “lawful lynchings” only through the use of a gun. More than six months after Michael Brown was killed by Officer Darren Wilson, the youth-led protests in Ferguson continue to fuel a national movement against police brutality. #blacklivesmatter

“Part of the struggle for us in Ferguson is to break a four-hundred-year belief that black people are not human,” says St. Louis native and activist Rev. Osagyefo Sekou.

After the Department of Justice released a blistering report finding systematic racism and prejudice against blacks in the Ferguson Police Department, protests continued, the police chief and several Ferguson officials resigned, and two police officers were injured in a shooting.

This problem, however, is not unique to Ferguson. St. Louis County is made of around 90 municipalities, each with their own police departments and courts. Residents report similar discriminatory treatment at the hands of law enforcement. And with so many different jurisdictions, a small infraction like an expired license plate can turn into dozens of fines and eventually warrants. Those in St. Louis who live below the poverty line are faced with the reality of buying food or paying fines.

In the Fusion documentary Ferguson: A Report from Occupied Territory, we turn to the residents of St. Louis County to tell us what it’s like to be racially profiled and under siege.