The One And Only 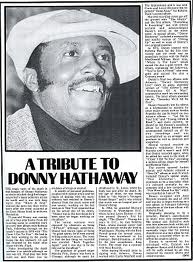 On October 1, 1945, the world was gifted with a singer/songwriter/keyboardist best known for his duets with Roberta Flack, Donny Hathaway. Donny fused R&B, gospel, jazz, classical, and rock strains in a modestly successful solo career. He was raised in St. Louis by his grandmother, Martha Pitts, a professional gospel singer. From the age of three, Hathaway accompanied her on tours, billed as the Nation’s Youngest Gospel Singer. He attended Howard University in Washington, DC on a fine-arts scholarship.

He worked as a producer and arranger for artists such as Aretha Franklin and the Staple Singers. After serving as the band director the Impressions, he recorded the single “I Thank You” for Curtis Mayfield’s label and sang backup with the Mayfield Singers. His first single “The Ghetto, Part 1” reached #23 on the charts. After recording several more singles and an album, Donny recorded “You’ve Got a Friend” with Roberta Flack. Their single “Where Is the Love?” reached #5 on the charts & earned them a Grammy Award.

He sang the theme song for the television program “Maude” and was hired by Quincy Jones to score the soundtrack for the 1972 film “Come Back Charleston Blue.” In 1973, reportedly suffering from periods of depression, his partnership with Flack deteriorated and Hathaway faded into relative obscurity. Five years later, he recorded “The Closer I Get to You” with Flack. This was their biggest hit & reached #2 on the charts as well as earned them another Grammy nomination.

Gone too soon, but he left a profound footprint upon the souls of mankind. We loved you Brother Donny and miss the gift you shared with the world but you will never be forgotten. Rest In Peace!

Listen to the music I’ve added; trust and believe it will warm you heart. And that’s my Thought Provoking Perspective…

Put Your Hand In The Hand