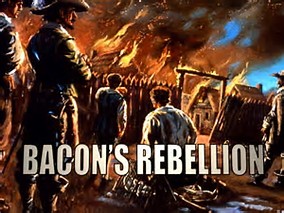 Here is a little bit of history, which to some revealing because I am sure many of you don’t know or were not taught where the beginning of white supremacy began in school. It began in Virginia right after Bacon’s Rebellion. Beacon rose up against the rich and wealthy people and did it with all of the oppressed people. They, white folk, found out when Bacon organized the blacks, poor white, and people of a lower class banded together it was dangerous for the wealthy class and as a group, they overpowered the elite, which could never happen again.

Therefore, from this revolt white supremacy was created. Bacon’s Rebellion was an armed rebellion in 1676 by Virginia settlers led by against the rule of Governor William Berkeley. The colony’s dismissive policy as it related to the political challenges of its western frontier, along with other challenges leaving Bacon out of his inner circle, refusing to allow Bacon to be a part of his fur trade with the Indians, helped to motivate a popular uprising against Berkeley, who had failed to address the demands of the colonists regarding their safety.

A thousand Virginians of all classes and races rose up in arms against Berkeley, attacking Indians, chasing Berkeley from Jamestown, Virginia, and ultimately torching the capital. The rebellion was at first suppressed by a few armed merchant ships from London whose captains sided with Berkeley and the loyalists. Government forces from England arrived soon after and spent several years defeating pockets of resistance and reforming the colonial government to be once more under direct royal control.

It was the first rebellion in the American colonies, although one followed in Maryland later that year. The alliance between indentured servants and Africans (most enslaved until death), united by their bond-servitude, disturbed the ruling class, who responded by hardening the racial caste of slavery in an attempt to divide the two races from subsequently united uprisings with the passage of the Virginia Slave Codes of 1705. This is where the divide and conquer concept came from. While the farmers did not succeed in their initial goal of driving the Indians from Virginia, the rebellion did result in Berkeley being recalled to England.

But what it did was put a plan into play that made whites supreme in all areas of white society, so they could never unite again. Modern historians have suggested it may have been a power play by Bacon against Berkeley but his personal vendetta between him and Berkeley resulted in all people coming together for a common cause, which was the last time it happened. However, Bacon’s followers used the rebellion as an effort to gain government recognition of the shared interests of all social classes of the colony in protecting the “commonality” and advancing its welfare.

Nathaniel Bacon arrived with a quantity of brandy; after it was distributed, he was elected leader. Against Berkeley’s orders, the group struck south until they came to the Occaneechi tribe. When they got the Occaneechi to attack the Susquehannock; Bacon and his men followed by killing most of the men, women, and children at the village. Upon their return, they discovered that Berkeley had called for new elections to the Burgesses in order to better facilitate the Indian problem.

The recomposed House of Burgesses enacted a number of sweeping reforms. Bacon was not serving his duty in the House; rather, he was at his plantation miles away. It limited the powers of the governor and restored suffrage rights to landless freemen. After the passage of these laws, Bacon arrived with 500 followers in Jamestown to demand a commission to lead militia against the Indians. The governor, however, refused to yield to the pressure. When Bacon had his men take aim at Berkeley, he responded by “baring his breast” to Bacon and told Bacon to shoot him. Seeing that the Governor would not be moved, Bacon then had his men take aim at the assembled burgesses, who quickly granted Bacon his commission.

On July 30, 1676, Bacon and his army issued the “Declaration of the People of Virginia”. The declaration criticized Berkeley’s administration in detail. It accused him of levying unfair taxes, appointing friends to high positions, and failing to protect frontier settlers from Indian attack.

After months of conflict, Bacon’s forces, numbering 300-500 men, moved to Jamestown and burned the colonial capital to the ground on September 19, 1676. Outnumbered, Berkeley retreated across the river. In Edmund S. Morgan’s classic 1975 American Slavery, American Freedom: The Ordeal of Colonial Virginia connected the calamity of Bacon’s Rebellion, namely the potential for lower-class revolt, with the colony’s transition over to slavery. But for those with eyes to see, there was an obvious lesson in the rebellion. Resentment of an alien race might be more powerful than resentment of an upper class. Unfortunately, Bacon died before white supremacy took affect but it was because of his revolution that the concept of white supremacy was created. And that’s my thought provoking perspective…

Welcome to Thought Provoking Perspectives a blog designed to be a potent source of empowering knowledge to broaden the information base with those who share my passion for the written word and the empowerment of thought. END_OF_DOCUMENT_TOKEN_TO_BE_REPLACED
This entry was posted on Wednesday, April 5th, 2017 at 10:49 am and tagged with Bacon's Rebellion, books, history, Jamestown, news, PBS, slavery, Uncategorized, Virginia, white supremacy and posted in African American, black issues, civil rights, education, GOP, history, Politics, racism, slavery. You can follow any responses to this entry through the RSS 2.0 feed.
« Did You Know: Harlem Saved A King
The Master Of Distraction »