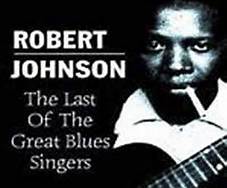 It is a great joy to share the glorious past of the ghost of the greats whose shoulders. The history of black music is littered with tragic figures, and none are more tragic than Robert Johnson’s story that will live for eternity. Legend has it that he sold his soul to the devil at the crossroads for his story to live for all times.

Robert Leroy Johnson is among the most famous of all the Delta Blues musicians whose landmark recordings from 1936-37 display a remarkable combination of singing, guitar skills, and tremendous songwriting talent that have influenced generations of musicians. This amazing, ultimate star-crossed musical genius laid the early framework of rock and roll decades before that term was even imagined.

Not much is known about Johnson’s shadowy, poorly documented life and violent death at age 27, which is one of the reasons that have given rise to his legend. With that being true, the music and legacy he left behind is irrefutable and unparalleled.

He is considered by some to be the “Grandfather of Rock-and-Roll” for his vocal phrasing, original songs, and guitar style. His music has influenced a range of musicians, including Led Zeppelin, Bob Dylan, Jimi Hendrix, The Allman Brothers Band, The Rolling Stones, The White Stripes, The Black Keys, Peter Gabriel, Neil Young, and Warren Zevon. Eric Clapton called Johnson “the most important blues musician who ever lived.

Johnson was conceived in an extramarital affair and born in Hazelhurst, Miss. in 1911. Most of his biographical details have been lost to history, but what’s known is that he learned guitar in his teens, got married, and had a girl who died in childbirth. The death led Johnson to throw himself even deeper into his music. He fled to Robinsonville, Miss. where he was influenced by early blues legends Son House and Willie Brown.

By 1933, Johnson remarried and began playing the guitar professionally. He once related the tale of selling his soul to the devil at a crossroads in exchange for his talent. Johnson tells the story in his song “Crossroads Blues.” Playing for tips up and down the Delta, Johnson gained in popularity. But as he grew in fame and was known as a noted philanderer. He would also walk off in the middle of performances and not be seen or heard from for weeks at a time.

In 1936, he was put in contact with Columbia Records talent scout Ernie Oertle, who took him to San Antonio, Tex. where Johnson recorded classics including “Sweet Home Chicago,” “There’s A Hell Hound On My Trail,” and his signature “Terraplane Blues.”

Johnson began to tour nationally and became known for his unique voice and halting guitar riffs. But in 1938, as the legend goes, the devil caught up with him. While playing at a juke joint, he flirted with a woman whose husband became jealous. The man laced Johnson’s whiskey with strychnine that caused him to become violently ill playing until he collapsed. He died four days later at age 27, although conflicting stories say he survived the poisoning and died later of pneumonia.

There are at least two Mississippi gravesites that bear his name leaving questions about his passing and burial. “The reason, that it’s so powerful a story, is because it is the outline of the tragic side of the music that followed,” said music journalist Alan Light. “Some knew him as a musician, others by legend, but his shadow touches everyone who came out of that time and place.”

Black History is American History and I believe our story is the greatest story ever told. And that’s my Thought Provoking Perspective…

Welcome to Thought Provoking Perspectives a blog designed to be a potent source of empowering knowledge to broaden the information base with those who share my passion for the written word and the empowerment of thought. END_OF_DOCUMENT_TOKEN_TO_BE_REPLACED
This entry was posted on Thursday, September 7th, 2017 at 6:01 pm and tagged with amazon, America, black history month, Blues, bluesman, CNN, entertainment, history, Jazz, music, PBS, Robert Johnson, rock and roll, soul music, spirituality and posted in African American, black issues, blues, civil rights, education, GOP, history, Music, Obama, Politics, racism, Republican. You can follow any responses to this entry through the RSS 2.0 feed.
« Labor Day: Remember The Slaves Who Built America And Died
The Trump Disaster »